Provision for a Choir to lead and assist in chapel services has been an integral part of New College’s existence since its foundation in 1379, and despite major religious and constitutional changes during the past several hundred years the Choir remains a vital and much-loved component of College life and worship. 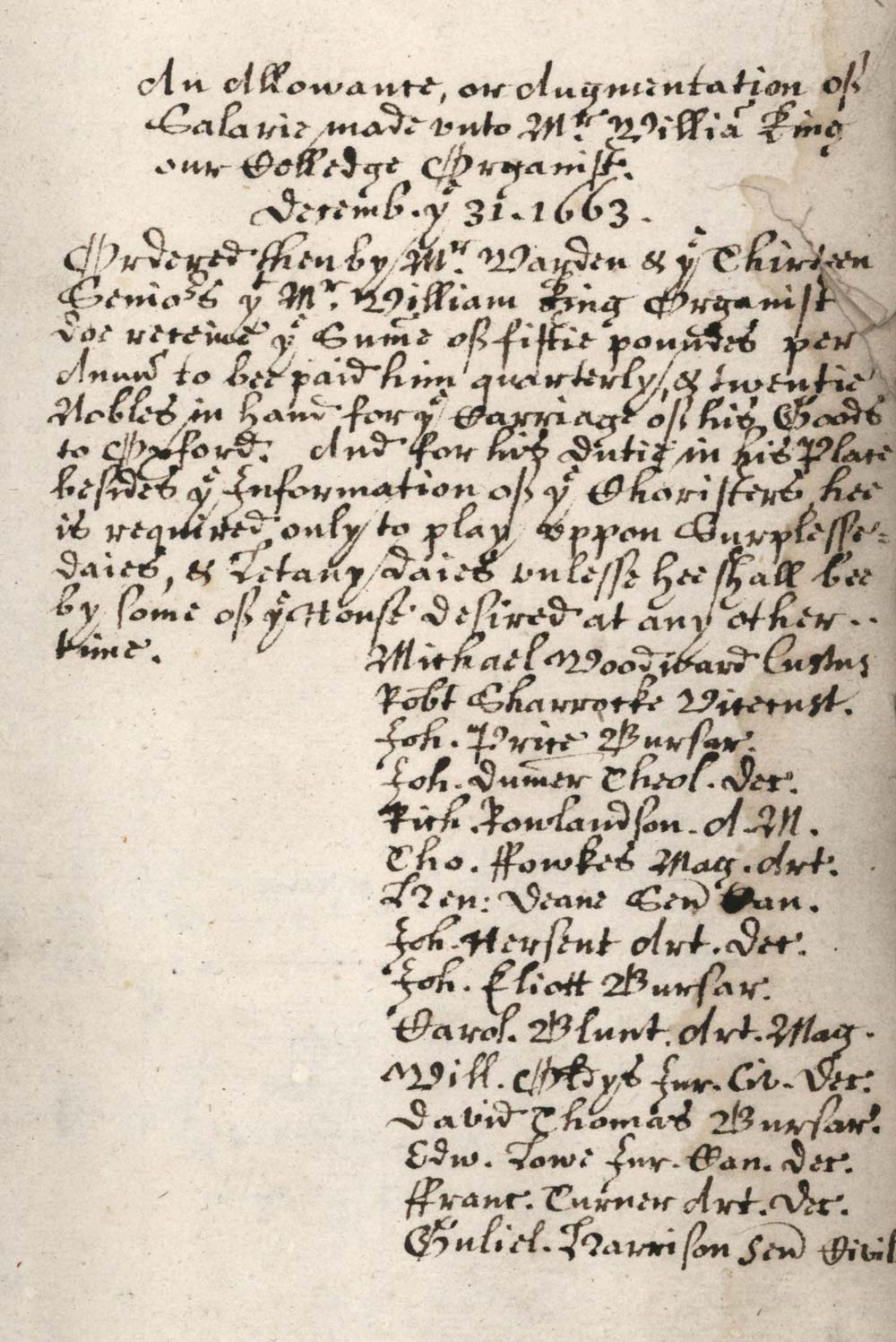 The Founder’s Statutes specified that the Chapel should be served by ten priests ‘of good voice and well-trained in the arts of singing and preaching’, one of whom was elected each year as Cantor ‘being charged with leading the singing of refrains and with all other tasks proper to the superintendence of the choir’, and three stipendiary chaplains ‘to lead and instruct all other Fellows and Scholars in singing, chanting, and reading, and who shall lead the singing and reading as is suitable’. There should also be sixteen choristers, ‘poor and needy boys of around twelve years of age, who, being sufficiently competent in the arts of reading and singing, honest, and of decent speech and conversation, shall be suffered to assist with the serving, reading, and singing in Chapel, and shall assist the Priests and Fellows in Holy Orders who are to celebrate each day in Chapel, serve at the other Divine Offices in the same, prepare and arrange matters for those Scholars and Fellows of this College who are to read the lesson, and also assist those others of the College servants in Hall, attending the Fellows at table’. In connection with the last duty, waiting on the fellows at meals in Hall, tradition has it that the carvings above the buttery doorway depict a chorister rushing to serve bread and beer. The Choristers were to be educated in reading, plainsong, and the elements of grammar; thus the establishment of the choir school connected directly with the college was confirmed.

The form of Divine Service took the form of daily masses, Matins, Vespers and services at the other Canonical Hours, which followed the Use of Sarum and allowed for processions around the cloisters ‘with singing and with plainsong’.

In the 1460s, Warden Chaundler ordered the compilation of a hagiography of William of Wykeham, illustrating it with several images. The most well known depicts the buildings of the Great Quadrangle at that date. In front of it stands the Warden, flanked by the  scholars and senior fellows, and in front of them stand or kneel the choristers: thirteen tonsured chaplains and clerks standing behind sixteen kneeling choristers.

In theory there were no formal changes to the statutes regulating the Chapel and Choir until the 1870s; in practice of course there must have been many ad hoc changes in response to the upheavals of the Reformation, Civil War, and times of plague and natural disaster.  The Reformation was imposed on New College only gradually from 1535 onwards, its real impact not coming until the 1560s when the Bishop obliged college to purchase Anglican communion books and destroy the medieval music books, some of which were cut up as wrappers for estate rentals. 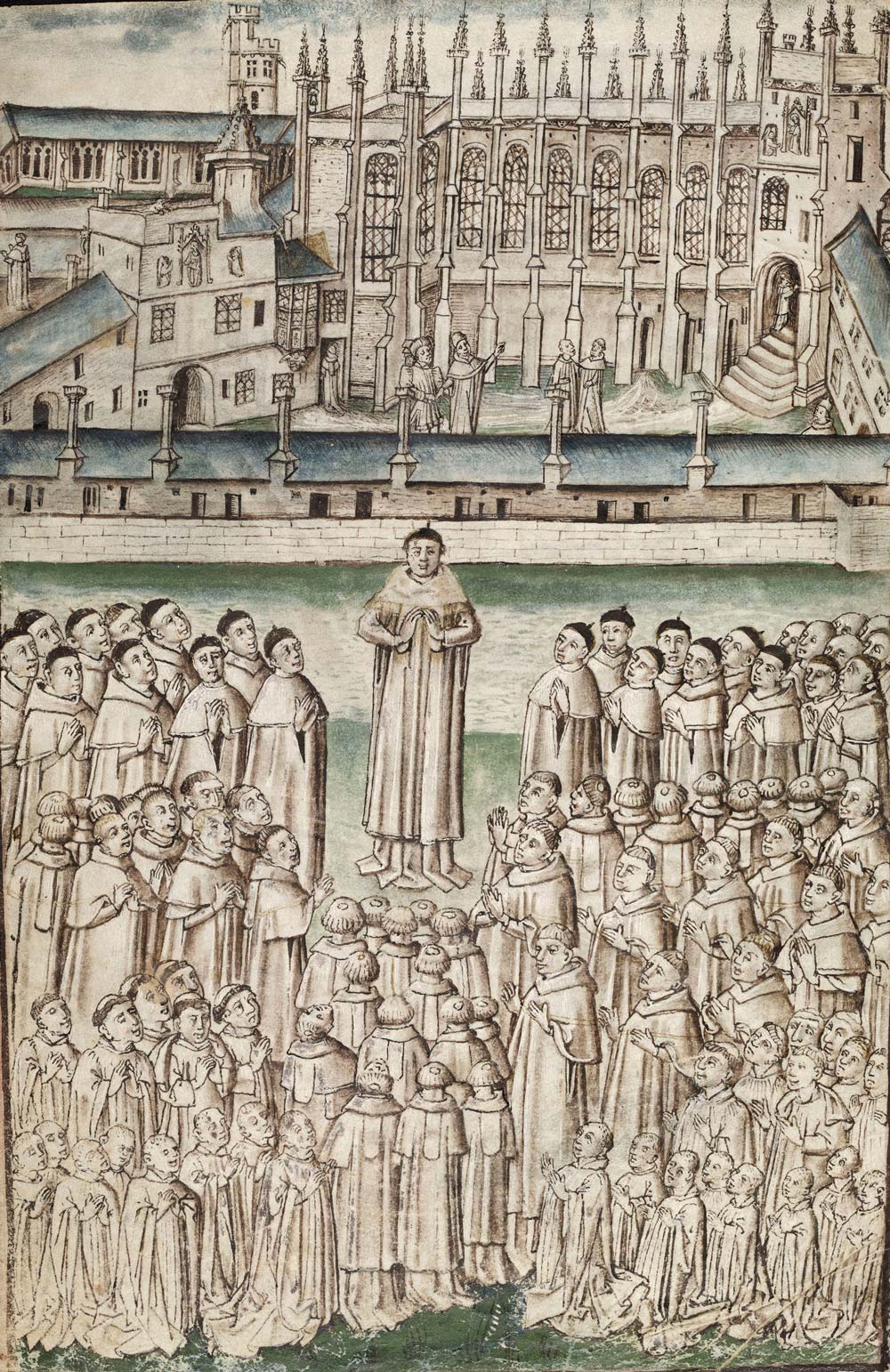 Members of New College, including choristers and chaplains, 1460s.

Medieval altars, images and (in 1572) the old rood-loft were also destroyed. Bishop Horne’s Visitation of 1567 in particular insisted on the adoption of Anglican liturgy, gave direct orders to the choir to sing psalms before and after sermons, and to refrain from ‘turning to the East in papistical fashion during the Gloria Patri’. Yet the chapel’s music continued to flourish in the new Protestant style, and to a high standard. 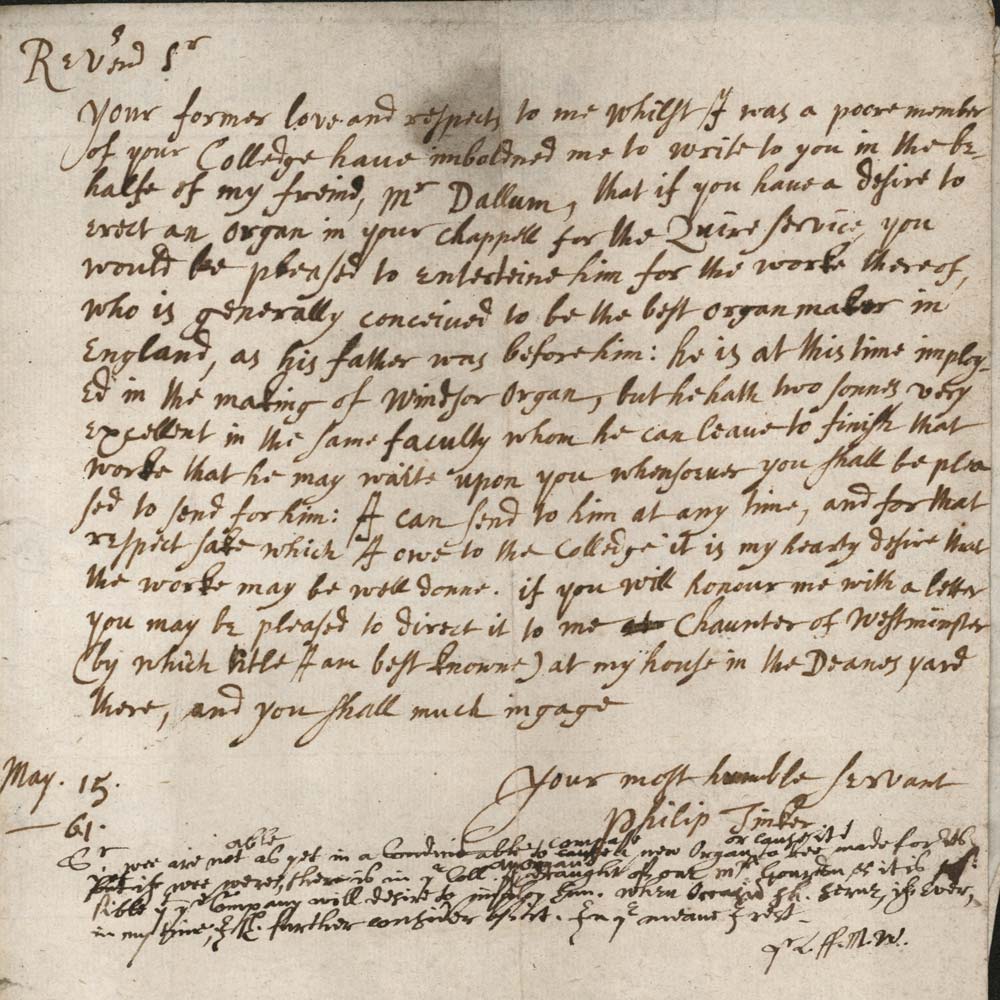 Great upheaval came during the Civil War. Royalist militias drilled in the Front Quad and the cloisters became a weapons arsenal. Oxford surrendered in 1646, and Parliamentary troops moved into New College, further wrecking the chapel interior. Within a few years a parliamentarianWarden was imposed on the college, and the organist (Miles Coleman), four chaplains and twelve choristers were driven out, along with seventeen fellows. It must have been virtually impossible to maintain regular services or high choral standards until after the Reformation, when work began to restore the chapel and its musical excellence.

Robert Dallam’s new organ was installed, under his supervision, by 1663 (and perhaps on the strength of its excellence the organist William King won a pay rise from the college), and when Dallam died three years later he was buried in the cloisters opposite the west door of the antechapel. Gradually the college’s musical excellence became well known once more.

Further changes came to the Choir in 1870, when new Statutes ordained that ‘For the celebration of Divine Service in the College… there shall be a Choir consisting of not less than Three Chaplains in Holy Orders, Eight Lay-Clerks, and Sixteen Choristers’ (Statutes 1870, cl. 17). They were to be paid out of College revenues and certain benefactions, and these 1870 Statutes also saw the first formal provision of what would become the Choir Fund. A decade later the Statutes were revised to allow greater flexibility of numbers, and directed that ‘For the celebration of Divine Service in the College, as heretofore, there shall be maintained by the College such a number of Chaplains in Holy Orders, Lay Clerks, and Choristers, as shall from time to time be determined by the Warden and Fellows’ (College Statutes 1881, cl. 7), and that flexibility still pertains today.  Although there had always been provision for a Precentor to be appointed annually from among the Chaplains or Fellows, from 1899 he was to work very closely with the newly-established Choir Committee.  By that date the great restoration of the Chapel by Gilbert Scott and James Pearson was complete, and Nathaniel Hitch’s stone statues had been installed in the reredos as a fitting focal point for those attending chapel services.

Fragment of medieval music from the chapel used as a cover for a later estate rental.

The New College choir has been fortunate for much of its history for attracting organists and choirmasters of high repute both as composers and musicians. From the 1920s onwards it has also maintained a tradition of broadcasting concerts and services through the BBC, and of producing commercial recordings of its work.