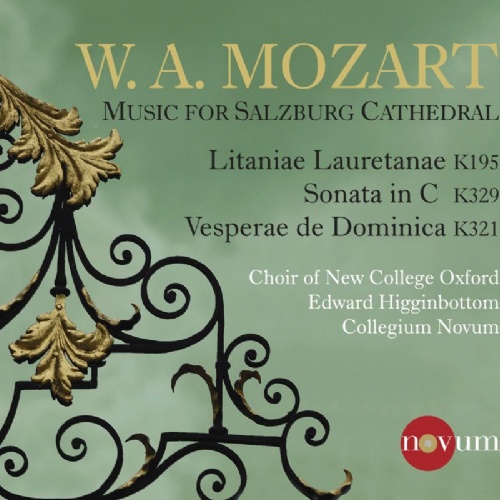 New College Choir's Novum label has reached its tenth issue with a fabulous Mozart release. In the short space of time of the label's existence, Novum has established for itself a reputation for excellence, integrity, innovation and looks. For the new release, we travel to Salzburg, and get inside the skin of Mozart's music for Archbishop Colloredo. Whatever the strain in personal relations between the two, Mozart produced the loveliest of compositions for his rather austere employer. New College Choir with Collegium Novum performs two of the best scores: the Litaniae Lauretanae (K195) and the Vesperae de Dominica (K321). Thrown in for good measure is the splendid orchestral Epistle Sonata in C (K329). The solo singing in these pieces is undertaken by Choir members, just as in Mozart's day. This gives the recording an unusual homogeneity. It also reveals some astonishing talent.

'Litaniae Lauretanae (1774)... demonstrates the teenage Mozart's craftsmanship and taste, and is presented with utmost confidence and charisma by the New College Choir, lusty and open throated in attack, and fully demonstrating their appreciation of this music. The onus falls largely on the superb treble soloist, Inigo Jones, who exudes confidence and is unfazed by  Mozart's tricky vocal writing; he is matched by the boy alto Michael Alchin and two choral scholars.'
- David Threasher, Gramophone April 2014