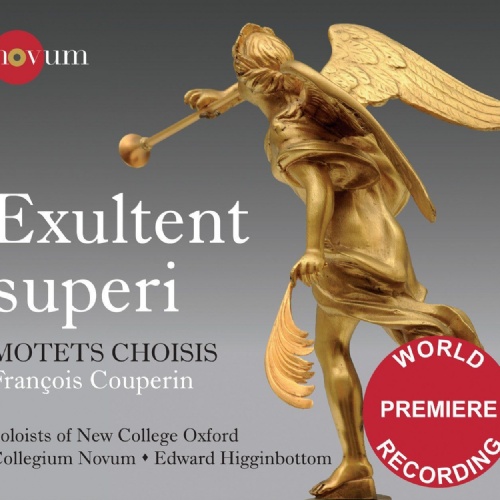 From the foreword by Edward Higginbottom:

When I wrote the entry on François Couperin for the New Grove Dictionary of Music, I read through every single extant piece of his music – that is apart from three motets which had not been published at the time, and which were unperformable because they lacked string parts (long since lost). Subsequently I came to see that these three motets – Resonent organa, Ornate aras and Exultent superi – were among his best. The challenge was to restore them. This I have done by composing string parts that Couperin might have written. These motets, newborn and set in the context of a selection of other sacred music – motets choisis – reveal Couperin as a master not only of keyboard music but also of vocal

'The performance is astonishing. Two New College trebles, aged 11 and 13, sing with a musical maturity and technical focus which I have never heard bettered. Intonation is spot on, with none of that instability (for some winsome, for others unnerving) which often characterises unbroken boys' voices. In the duet 'Lauda Sion Salvatorem' their individually distinctive voices are beautifully matched. No less exceptional is the haute-contre (light high tenor) of Guy Cutting[...] With excellent strings and sympathetic recording this is a real revelation.'  -  George Pratt, BBC Music Magazine
'These are scrupulously prepared performances using soloists who demonstrate extraordinary assurance. Particularly impressive is their vocal sonority and unity. They evince careful regard for the sacred texts and their singing is reverential. Individual vocal character is a quality that is often sacrificed by certain choral groups in their endeavour to achieve pin-point precision; not so here ... The crystal clear and superbly balanced sound quality is as pleasing as I have heard in a church acoustic. It would be hard to imagine a more gratifying recording of these scores. In all respects this Novum release is quite stunning!'
-  MusicWeb International, Recording of the Month, February 2012
"...the two treble soloists on this disc far surpass any I have heard and deliver music-making of truly professional quality..." - Cathedral Music, May 2013