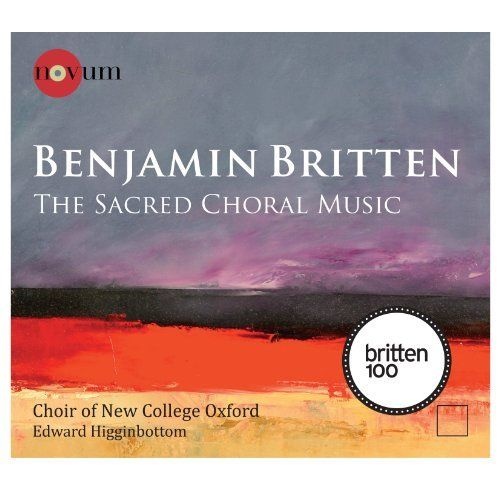 Britten's sacred music is among the most engaging and original music of its kind composed in the middle years of the 20th century. New College Choir was among the first to recognise its quality, and continues to sing it with passion and panache. This new New College anthology (in 2 CDs), released to mark the centenary of Britten's birth, is an overarching view of his work in this domain, featuring favourites such as Rejoice in the Lamb and the Hymn to St Cecilia alongside settings more rarely heard, the Hymns to St Peter and of St Columba, and the wedding anthem Amo ergo sum. Overall, it offers a definitive panorama of Britten's sacred music from the 1930s to the 1960s in exemplary performances by one of the world's leading choirs.

"This pair of discs from New College Oxford under their long-standing director of music offers two hours of exemplary music-making. Supported by the Britten–Pears Foundation, this beautifully presented recording gathers together, for the first time as far as I’m aware, all of Britten’s sacred choral music. It makes for a more substantial corpus of music than one might at first expect and yields many unknown treasures to those familiar with the composer’s home territory of opera and art song.

"A first-rate release to kick start the Britten centennial year and a fine addition to New College’s own recording label. Not to be missed." - Choir and Organ, April 2013